Learn and Improve your R skills for Psychology

Signal detection theory (SDT) is used when psychologists want to measure the way we make decisions under conditions of uncertainty. SDT assumes that the decision maker is not a passive receiver of information, but an active decision-maker who makes difficult perceptual judgments under conditions of uncertainty. To apply signal detection theory to a data set where stimuli were either present or absent, and the observer categorized each trial as having the stimulus present or absent, the trials are sorted into one of four categories: Hit, Miss, Correct Rejection and False Alarm. 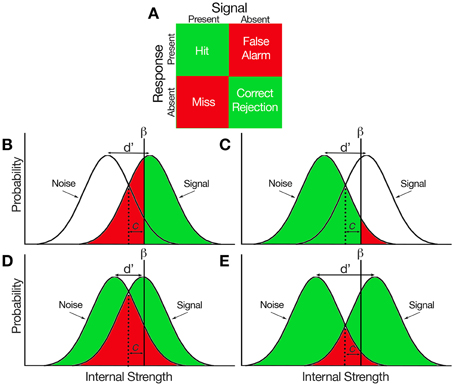 Based on the proportions of these types of trials, we can compute indices of sensitivity and response bias:

To compute them with psycho, simply run the following:

This package helped you? You can cite psycho as follows: