Learn and Improve your R skills for Psychology

The Bayesian framework is the right way to go for psychological science. To facilitate its use for newcommers, we implemented the bayes_cor.test function in the psycho package, a user-friendly wrapper for the correlationBF function of the great BayesFactor package by Richard D. Morey.

There is a significant (whatever that means), yet weak positive correlation between Concealing and Tolerating affective styles.

And now, see how quickly we can do a Bayesian correlation:

The results are roughly the same, but neatly dissociate the likelihood in favour or against the null hypothesis (using the Bayes Factor), from the “significance” (wether a portion of the Credible Interval covers 0), from the effect size (interpreted here with Cohen’s (1988) rules of thumb). Critically, you can, now, simply copy/paste this output to your manuscript! It includes and formats the Bayes Factor, the median (a good point-estimate, close to the r estimated in frequentist correlation), MAD (robust equivalent of SD for median) and credible interval (CI) of the posterior distribution, as well as effect size interpretation.

We can have access to more indices with the summary:

Those indices include the ROPE decision criterion (see Kruschke, 2018) as well as the Maximum Probability of Effect (MPE, the probability that an effect is negative or positive and different from 0).

We can easily extract the posterior distribution to visualize the probability of possible effects. 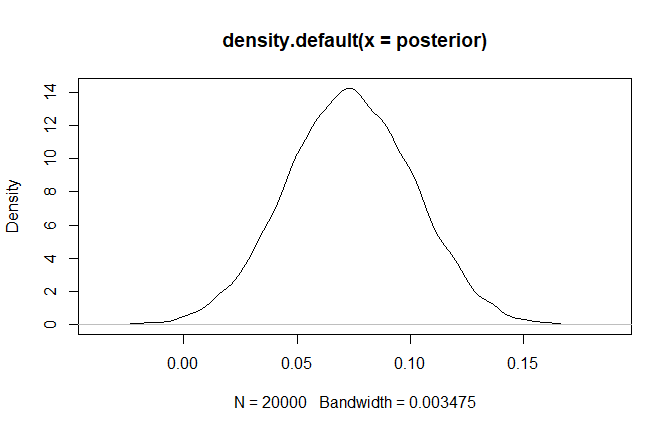 Of course, these reporting standards should change, depending on new expert recommandations or official guidelines. The goal of this package is to flexibly adaptive to new changes and good practices evolution. Therefore, if you have any advices, opinions or such, we encourage you to either let us know by opening an issue or, even better, try to implement them yourself by contributing to the code.

This package helped you? Don’t forget to cite the various packages you used :)

You can cite psycho as follows: